Ever since the explosion on the boat full of Afghani refugees, the news has been full of scaremongering again. They're faithfully reporting how we'll be overrun with asylum seekers because the new goverment has changed policies.  I'm calling it scaremongering because they never report on the actual total number of asylum seekers Australia gets or, for that matter, the relative amount compared to other countries.

I've always known that Holland (half the size of Tasmania, about as many people as Australia) got far more requests for asylum than Australia, but I had no idea of actual numbers.  During this evening's news I decided to have a bit of a google and find out.

UNHCR has conveniently provided a PDF with statistics from between 2004 and 2008 for pretty much all countries in the world. Unfortunately the stats for Holland are not reliable, so I've left them out of this graph.

So here it is; a graph that shows the number of requests for asylum as a percentage of the total population. You can see that  compared to this relatively representative list of developed countries Australia actually gets a lot less than average.

Less than average even when you include the few hundred people who arrive by boat each year, who get intercepted and processed off-shore, as they are not included in the UNHCR numbers. 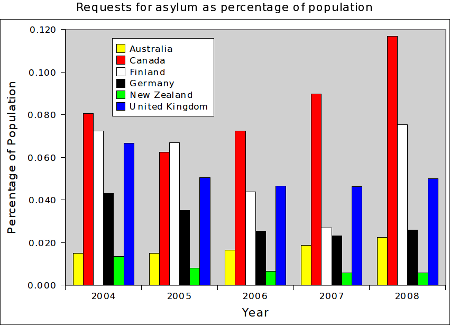 Yes, that's 0.022% for 2008. So my take on the news reporting about boat people? Cheap sensationalism, playing on xenophobia. Shame.

we get by with a little help from my friends

please excuse the short comment, as your spam filter, let alone your netskillz, is tight.

How many of the Canadian asylum requests come from Americans?

The asylum seeker debate has just started up again, with the installation of a new prime minister. She has said that in this debate there is no "politically incorrect", only honest opinions.

I just checked the UNHCR figures for 2009¹, that seem to suggest the relative percentage of asylum seekers versus the population of Australia has declined from 0.012% to 0.011% over the past year.

So my honest opinion remains that a bunch of scaremongering politicians are pandering to racist redneck views in the hope of winning the next election. Get the fuck over it and focus on stuff that actually matters.

And actually, 2009 appears to contain reliable number for the Netherlands as well. Yay! For Australians that aren't aware, The Netherlands is about half the size of Tasmania but 17 million people live there. You want to talk about "full"?

The relative number there is 0.096%. That's over 8 times more than Australia.

(Yes, I am aware a bunch of right wing morons won big in the last election, but that doesn't negate the fact that the media and politicians are leading Australians to get upset about a storm in a teacup)

I admire the valuable information you offer in your articles. I will bookmark your blog and have shared it with my friends. I am quite sure they will learn lots of new stuff here than anybody else!